News: The first-ever survey of the fishing cats in and around the Chilika lake in Odisha started. The Fishing Cat Conservation Alliance will be starting a worldwide month-long campaign. It will raise awareness and garner support across the globe for the conservation of the Fishing Cat. 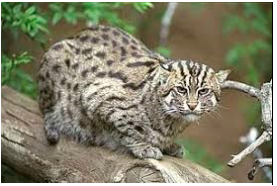 About the Fishing Cat: It is a highly elusive wild cat feline species found primarily in wetland and mangrove habitats.

Globally: They are found in South and Southeast Asia. In Cambodia, images of fishing cats are found carved in the walls of ancient structures and are known as Kla Trey, ‘Tiger fish’.