News: Gangetic River Dolphin was beaten to death by a group of men in Uttar Pradesh’s Pratapgarh leading to the arrest of three people. 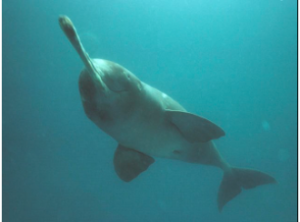 About the Species: It is primarily found in the Ganges and Brahmaputra Rivers and their tributaries in India, Bangladesh and Nepal.

Habitat: They prefer deep waters in and around the confluence of rivers and can be an indicator of the health of the freshwater ecosystem as they can only live-in freshwater.