News: Ministry of Environment Forest and Climate Change(MoEFCC) along with Wildlife Conservation Society (WCS) has come up with a unique initiative — a “firefly bird diverter” for overhead power lines in areas where Great Indian Bustard (GIB) populations are found in the wild. 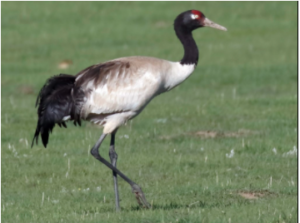 About Great Indian Bustard: It is one of the heaviest flying birds (weighing up to 15kgs). They inhabit dry grasslands and scrublands on the Indian subcontinent.

Habitat: It is endemic to the Indian subcontinent. It is found in Rajasthan (Desert National park), Gujarat, Madhya Pradesh, Karnataka and Andhra Pradesh in India and parts of Pakistan.