News: The Madras hedgehog, that has been on this land since before the city got its name, is now the focus of a fledgling grassroots awareness campaign aimed at reviving its numbers. 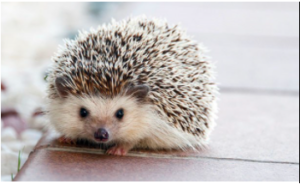 About Hedgehog: Hedgehog is an insectivorous spiny (needle-like anatomical structure) mammal of the subfamily Erinaceidae.

These mammals have been on this land even before human evolution. However, there is no mention of them even in our folk tales.

Distribution: There are seventeen species of hedgehog found through parts of Europe, Asia, and Africa, and New Zealand. However, there are no hedgehogs native to Australia and America.

Hedgehog Species in India: Of the 17 species of hedgehog around the world, India is home to three:

How are Hedgehog species in India different from other countries?

Hedgehogs in India are distinct in many ways. For instance, hedgehogs in the UK, Africa, and Central Asia hibernates in winter, but the ones in South India go into Estivation in summer instead. In South India, it is able to slow down its metabolism when food is scarce.

Threats to Hedgehogs species in India: In the last 20 years, hedgehog’s species in India are on decline drastically due to habitat changes, development and its capture for domestication or sale.

Estivation: It is a state, when an animal goes into a dormant state during a hot period. It is to wait for passing water scarcity or harsh heat. Many desert creatures estivate