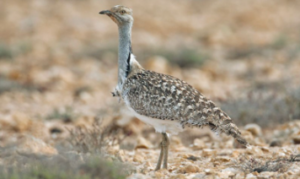 About Houbara Bustard: It is a large terrestrial bird found in parts of Asia, the Middle East and Africa.

Different Types: Houbara Bustard comes in two distinct types as recognized by the International Union for Conservation of Nature, one residing in North Africa (Chlamydotis undulata) and the other in Asia (Chlamydotis macqueenii).

Distribution: The population of the Asian houbara bustards extends from northeast Asia, across central Asia, the Middle East, and the Arabian Peninsula to reach the Sinai desert.