News: Indian star tortoises (Geochelone Elegans) have been seized by the Forest officials while being smuggled from Andhra Pradesh to Odisha. 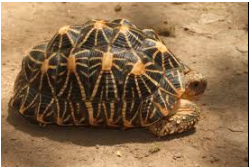 About Indian star tortoise: It is a species of tortoise found in dry areas and scrub forests of India, Pakistan and Sri Lanka. It is accustomed to monsoon seasons.

These tortoises are easily recognizable by their star-patterned shells.

Habitat: Star tortoises come from a wide distribution in India, where they may live in semi-desert grasslands and moist deciduous forest. They may be found on sand dunes, in scrub forests, humid jungles and in human-altered habitats.

Threats: It is the single most confiscated species of freshwater tortoise in the world. It faces threats such as loss of habitat to agriculture and illegal harvesting for the pet trade.