About two years ago, on a lazy March afternoon, a young man walked in to see me. He looked dejected, with ties loosened around the neck. I asked him, how did the Interview go?

“Did he ask you something on Hindi poetry?”

I shared his disappointment. We had been reciting poetry from Ramdhari Singh Dinkar, Nirala and Harivansh Rai Bachchan on the rooftop days before the interview to get things right on the D – Day.

And yet, when Bassi Sir saw “hindi poetry” in his hobby, he unleashed names which this young man had not heard of.  For some reason IPS board members have been known to be a little cruel in the Interview – and this is true for the past decade!

All is well that ends well.

And Rank 1 in Indian Forest Service.  He, like most other people joined Indian Administrative Service. The last time I spoke, he was happily posted in Bihar.

So when a year later, when I met Pradeep ( the famous guy from the Better Indian ) , I was a little skeptical seeing “Reading Indian Epics” in his hobby. I did grill him thoroughly, given that most people would read Devdutt Patnaik’s Jaya – one single book, and put “reading the Mahabharata story” in hobby.

And then I finally met Rishi. He had been an MGP and Current Affairs student for sometime, and I remembered him because he was from BITS Pilani – from where @LeoMessi10 had secured Rank 1.

We formed a group, given it was the last leg of his preparation, and we held a couple of mock interviews.

The day after the last group mock, he secured Rank 1 in IFS, and continued to prepare for  Civils interview in aspirant mode.

I had been seeing Rishi on and off for sometime. And finally, I asked him to pen down his story. And here it is.

Hello everyone my name is Rishi Kumar and I am 26 years old. Me and my younger brother live with my parents in the city of nawabs a.k.a Lucknow. We’re also very close with my uncles and grandparents who still live at our native place near Varanasi.

My tryst with Indian Forest Service

What qualities do you think are needed to clear this exam?

Mistakes that I made

In my earlier attempts I was not able to clear the prelims stage itself hence here i would like to share the mistakes i made.

This time I tried figuring out whether attempting less or more questions will give me a greater probability of clearing IFS prelims in the mock tests(Hence the quality number one).

I went with the option of attempting more questions (98) and it worked this year.

My strategy was to stick to what worked for me in the mock tests without being scared of the exam pressure. During the exam, I did have second thoughts about whether attempting almost the entire paper can turn out to be a disaster and I might end up missing out on the Civil Services cut off as well. But I stuck to my plan and it worked.(Hence the quality number 2)

My book-list for the preliminary examination

During the course of my preparation, I stuck to the standard books along with some additional sources for the topics I expected more questions on, such as Polity. I will be writing these sources in the next section.

I am writing these book lists keeping the cut off of Indian Forest Service in mind. One might be able to clear the Civil Services doing a bit less.

For the Mains Examination I was enrolled in ForumIAS Current Affairs classes. I have also done the MGP program of ForumIAS.

( Since I was preparing for Civil Services Examination simultaneously.)

However, I did prepare for IFS Mains separately after the Civil Services Mains Examination, and will write a detailed strategy for it separatly.

Keep Sources to the Minimum

Although I kept my sources to a minimum this year, I did attempt the final Forumias simulator tests for Prelims. I scored above 140 in the last one, so it was a good final paper to appear in right before the Prelims. Also the feedback by ForumIAS Mentors before the interviews helped a lot. I secured 225 marks / 300 in the Interview.

My marksheet for IFoS examination 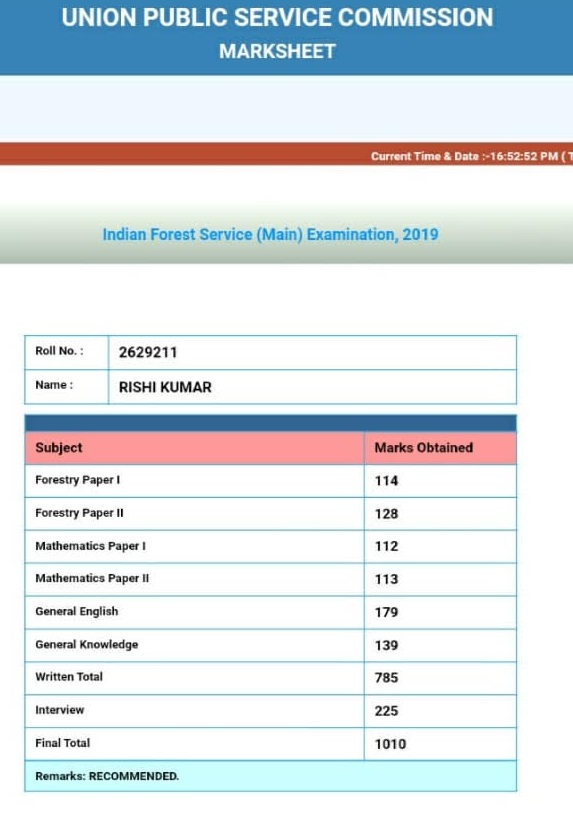 The pillars of my support

In the end I would like to say that I have reached this stage of success due to the following 3 major pillars:

I would like to wish all the aspirants good luck in their studies and I hope they achieve their dreams.

Rishi is an offline student of ForumIAS Academy. He has secured Rank 1 in IFS 2019 examination

Neyawn is an anonymous member of ForumIAS. He is a coder by profession, and often writes for ForumIAS. You can buy him coffee , if you really really like his work. You can say Hi to him or ask him a question on ForumIAS, on his profileView all posts by Neyawn