The United Nations’ high level meeting on tuberculosis, held on 26 September 2018, has committed to accelerating efforts and increasing funding towards achieving the agenda of the Sustainable Development Goals to end the tuberculosis epidemic by 2030.

SDG 3.3: By 2030, end the epidemics of AIDS, tuberculosis, malaria and neglected tropical diseases and combat hepatitis, water-borne diseases and other communicable diseases.

Tuberculosis, generally called TB is an infectious airborne bacterial disease caused by Mycobacterium tuberculosis, which most commonly affects the lungs but can also damage other parts of the body.

There are two TB-related conditions:

According to WHO’s 2018 Global TB Report,

According to WHO 2018 Global TB Report, 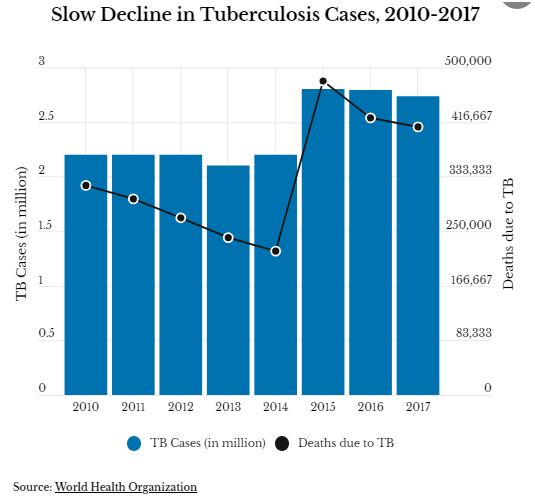 1961:District Tuberculosis Program was prepared by the Indian government, and Anantapur district in Andhra Pradesh state was the first model district TB centre (DTC). The programme aimed at integration of TB control schemes with the existing government health services.

Note: In 1992, the WHO devised the Directly Observed Treatment-Short Course (DOTS) strategy and advised all countries to adopt the strategy to combat the menace of tuberculosis. The DOTS strategy is based on 5 pillars:

2012-“Nikshay,” an online tuberculosis reporting system for medical practitioners and clinical establishments was set up. The aim is to increase the reporting of tuberculosis, especially from the private sector.

2018-At the End-TB Summit, Delhi, the TB-free India Campaign was launched to take the activities under the National Strategic Plan for TB Elimination forward in a mission mode for ending the epidemic by 2025.

2018– Indian government launched Joint Effort for Elimination of Tuberculosis (JEET), to increase the reporting of TB cases by the private sector.

Issues with TB Control in India and Reasons for its continued prevalence:

2.Underreporting and un-diagnosis:According to Global TB Report 2018, India is one of the major contributors to under-reporting and under-diagnosis of TB cases in the world, accounting for 26% of the 3.6 million global gap in the reporting of tuberculosis cases

3.Diagnosis:Biomarkers and other diagnostics that identify individuals at highest risk of progression to disease are inadequate.

4.Treatment:Inequitable access to quality diagnosis and treatment remains a major issue in combating tuberculosis. Further, the private sector which contributes a major part of TB care is fragmented, made up of diverse types of healthcare providers, andlargely unregulated. Also, standard TB treatment is not followed uniformly across the private sector, resulting in the rise of drug resistance.

5.Follow-up treatment: Though the reporting of TB cases has increased lately, the reporting of treatment outcomes has not been robust. The absence of consistent follow-up of treatment regimens and outcomes may result in relapse of cases and MDR-TB and XDR-TB. India has already been facing the problem of increasing MDR-TB cases

6.Drugs:The drugs used to treat TB, especially multidrug-resistant-TB, are decades old. It is only recently that Bedaquiline and Delamanid (drugs to treat MDR-TB) has been made available. However, access to such drugs remain low.

7.Funds:the RNCTP remains inadequately funded. There has been a growing gap between the allocation of funds and the minimum investment required to reach the goals of the national strategic plan to address tuberculosis.

8.Issues with RNCTP: Weak implementation of RNCTP at state level is another major concern. The Joint Monitoring Mission report of 2015 pointed out that the RNCTP failed to achieve both the main goals of NSP 2012-2017- Providing universal access to early diagnosis and treatment and improving case detection. Major issues with RNCTP include: human resource crunch, payment delays, procurement delays and drug stock-outs

9.R&D:R&D for new methods and technologies to detect the different modes of TB, new vaccines, and new drugs and shorter drug regimens have been slow, as compared to other such diseases like HIV/AIDS.

10.Social Stigma: According to a study which assessed social stigma associated with TB in Bangladesh, Colombia, India, India had the highest social stigma index. Patients often hesitate to seek treatment or deny their condition altogether for fear of social discrimination and stigmatization.

6.Mass awareness campaigns like ‘TB Harega Desh Jeetega’ can play an important role in breaking social taboos regarding TB and awaring people about the disease, precautions and its cure.