The COP is the decision-making body of the UNFCCC. All States that are party to the Convention are represented at the COP. They review the implementation of any legal instrument that the Convention adopts.

The Kyoto Protocol was adopted in Kyoto, Japan in 1997 and came into force in 2005. It aimed at cutting GHG emissions across the developed world by about 5% by 2012 compared with 1990 levels. While India ratified the Protocol in 2002, USA never ratified it and Canada withdrew from it in 2012.

Kyoto Protocol is based on the principle of “common but differentiated responsibility” and is the only global treaty with binding limits on GHG emissions.

10.2.1 Parties under the Kyoto Protocol

The Kyoto Protocol has two commitment periods: 2008-12 and 2013-20. The second commitment period was agreed on in 2012, known as Doha Amendment to the Protocol. As of January 2019, 124 states have accepted the Doha Amendment. Japan and Russia did not sign the second Kyoto term as it would impose restrictions on it not faced by its competitors like India and China.

Each commitment period has its own set of binding GHG emission reduction targets for developed countries to achieve. Nations that miss their Kyoto target will have to incur a penalty like getting banned from participating in the ‘cap and trade’ program.

Countries bound to the Kyoto targets can meet a part of their targets through three “market based mechanisms”. 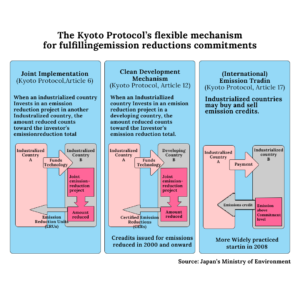