News: National Board for Wildlife (NBWL) has approved an Action Plan for Vulture Conservation 2020-2025. 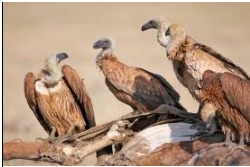 About the Species: Vultures are sociable creatures and are often seen as a collective unit. Out of 23 species of vultures in the world, nine are found in India.

Habitat: The preferred habitats of the Vulture are deserts, savannas and grassland near a water source. It also inhabits wooded country with game animals and livestock, up to 3,000 metres above sea level.

Distribution: Vultures are widely distributed, but they are absent from Australia and most oceanic islands

Their habit of eating carrion is extremely beneficial to humans, as it has a considerable effect on reducing the spread of diseases, some of which can be fatal. Read on to learn about the vulture.