What is Polar Vortex and why is the ozone depletion in Arctic different from that of Antarctic?

15 to 35 kms above the Earth’s surface, a layer of ozone has allowed life to thrive on Earth by protecting it from the ultraviolet radiations from the Sun. But the rising levels of pollution since the industrial revolution, particularly in the last one century, has resulted in the depletion of ozone in the stratosphere.

Appearance of hole over Antarctica

This is an annual phenomenon that takes place from September to early December when the westerly winds circulate all over the continent. The frigid temperature during this time, in combination with the Chlorofluorocarbons (CFCs) and hydrochlorofluorocarbons (HCFCs) contained in the manufactured chemicals that are emitted from the surface of the Earth, trigger ozone depletion. High altitude clouds are formed as the temperature goes down. Chlorine and bromine react within these clouds in a photochemical process and destroy the surrounding ozone layer. The following entry of ultraviolet rays increases the chances of skin cancer and blindness in humans and sun damage in animals.

In the Montreal Protocol, it was decided to phase out all the substances that cause damage to the ozone layer. It came into force in 1989 and considered the most successful model of international cooperation, especially when other important environmental treaties like Kyoto Protocol have failed to everybody’s disappointment. While all the chlorine and bromine containing substances are controlled by the Montreal Protocol, other ozone depleting substances like nitrous oxide are yet to be regulated under the treaty.

Appearance of hole over Arctic

The formation of ozone hole in the Arctic is a rare event given the fact that it usually doesn’t get cold enough in Arctic stratosphere for an ozone hole to form. It is almost three times the size of Greenland and probably the biggest ever detected in Arctic. Last time such an incident was recorded in 2011. What has changed the situation this year is the phenomenon of polar vortex. 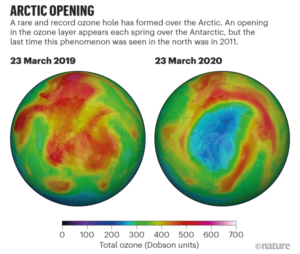 What is A polar vortex ?

Formation of polar vortex involves the accumulation of extremely cold air inside a ring of extremely strong westerly winds, also known as the Polar Night Jet. It appears in the upper stratosphere of both the poles every winter season. A strong polar vortex with high-altitude clouds is a fertile condition for the formation of the ozone hole. 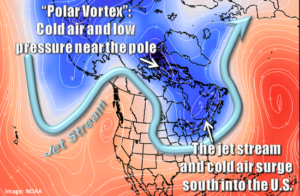 The location of an ozone hole has nothing to do with the location of the source of CFCs on Earth. Given the global pattern of winds, the chemicals are mixed from everywhere. But what makes the ozone holes appear only on polar regions is the low temperature these regions provide. Nonetheless, there is a consensus among scientists that the behavior of ozone depletion in Arctic is different from the one in Antarctic as a matter of timing of the occurrence.

This article series is a part of ForumIAS's Qrious Project. You can find other article in the series HERE→