What is WHO’s funding process and why has US withdrawn its contribution?

Just when the world is struggling with an unprecedented health emergency, US President Trump has decided to withdraw funding from WHO, accusing it of a China-centric bias that he thinks guided its delayed response in issuing the warning on coronavirus spread. Although it is partly true that China initially tried to cover up the severity of the virus spread and muzzled whistleblowers, nonetheless, this is not the time for moral abdication or allowing global leadership vacuum.

In global health diplomacy, WHO’s role is purely supportive, bereft of any power to fine or force nations to comply with its regulations, which is why, it rarely criticizes any government. It remains to be seen whether US considers this aspect in its reassessment to resume the funding after 60 to 90 days.

Founded in 1948 and based in Geneva, WHO’s role in eradication of smallpox and polio cannot be undermined. Its official aim to “promote health and keep the world safe and serve the vulnerable” is truly the need of the time. A specialized UN agency is better equipped to handle global health emergency given its past experience in vaccination campaigns and primary care, rather than individual countries that may get mired in geo-political rivalry and national interests.

It sounds ironic in today’s context that US has been a major contributor to the WHO against smallpox in 1960s and 70s. Over the years, it has been WHO’s largest voluntary contributor with its share of funding amounting to more than 15%. Voluntary contributions usually range from flexible to highly earmarked and are received from member states or from other partners. Assessed contributions, on the other hand, are dues paid by countries so as to be a member of the organization. The amount paid by a country is calculated in proportion to its wealth and population.

Other than these two, Partnership Contribution under Pandemic Influenza Preparedness Framework was introduced in 2011 for the sharing of influenza viruses and to make vaccines and other pandemic related supplies accessible. For not so well-funded activities, core voluntary contributions can be availed to benefit from a smooth flow of resources when immediate financing is lacking. 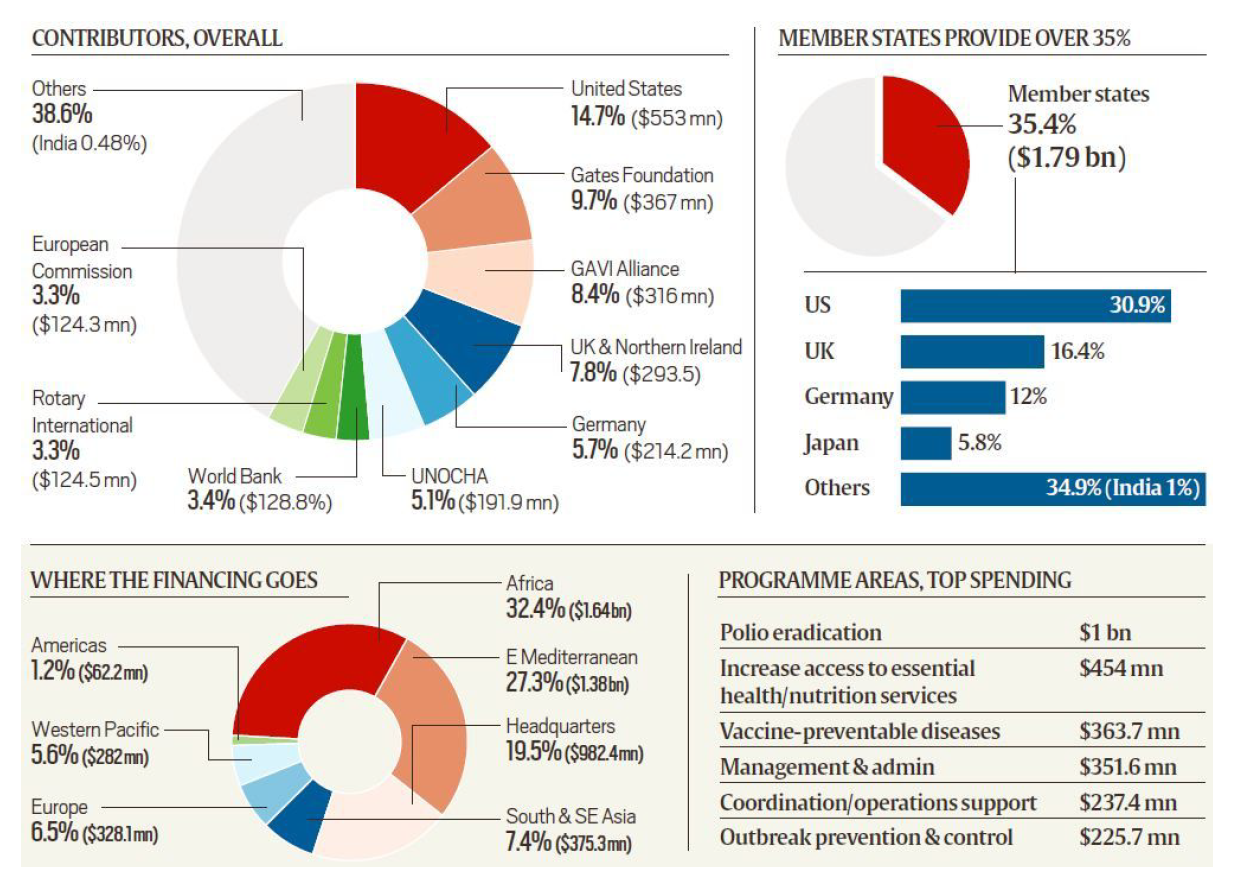 The halt in funding by US may not have immediate effect on WHO, but it can definitely have repercussions for poor and low-income countries as poor funding can prolong the epidemic cycle, resulting into an economic downturn. At the same time, the situation calls for a just consideration of the criticism of WHO. Even during the Ebola outbreak, WHO failed to respond promptly. This time, travel and trade bans could have been effectively restricted earlier. Taiwan, which is not a member of the WHO, has just like the US accused WHO of suppressing information about China’s coronavirus prevention measures.

Such discrepancies in the working of WHO shall be addressed through reforms. First of all, its top-heavy bureaucracy needs an overhaul to improve global health diplomacy. Secondly, it should put in place proper mechanisms to ensure accountability and transparency amongst countries in tackling global health emergencies.

Amidst all this chaos, India’s response to the pandemic has been lauded by the WHO. India has been its member right since 1948. The WHO India Country Cooperation Strategy 2019-2023 has been developed jointly by the Health Ministry and the WHO India country office to accelerate the progress on Universal Health Coverage and enhance India’s global leadership in health.

At the grassroots, WHO has actively partnered with India for immunization programs, tackling TB and neglected diseases such as leprosy and kala azar, as well as nutrition programs. As far as Covid-19 is concerned, WHO country office for India is closely working with Ministry of Health and Family Welfare in facilitating surveillance and contact tracing, hospital preparedness, laboratory diagnosis, implementation of containment plan and so on.

Looking forward to your feedback. 🙂

This article series is a part of Qurious series. You can find other article in the series HERE->