Why are the Governments in India relying on liquor sales so much ?

Keeping in mind the norms of social distancing  and to prevent spread of COVID-19, much to the dismay of many(wink wink), the government ordered the closing of alcohol stores all over the country on March 25th 2020, which were later reopened on May 4th 2020.

4 Reasons why liquor shops have been opened:

Firstly, it is to help government raise funds through taxes earned on the sales of liquor. As reported by The Wire, liquor brings in about 8% to 25% revenue to the state government.

Moreover, state governments like Delhi have imposed 70% corona tax on liquor to get enhanced revenues. 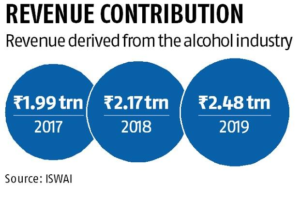 Secondly, the top three sources for state governments’ own tax revenue, as per RBI, are state GST (43.5%), sales tax from petroleum products and others (23.5%), and states excise (12.5%). These have all dried up because of the lockdown.

Thirdly, to prevent illegal trade in alcohol during the lockdown which will only deprive the government of revenue and flood the buyers with unregulated, possibly hazardous substitutes.

Fourthly, there has been active lobbying for opening liquor shops by organizations such as International Spirits & Wine Association of India and Confederation of Indian Alcoholic Beverage Companies (CIABC), both including leading alcohol firms. CIABC wrote to many state governments along with Ministry of Commerce and Ministry of Health arguing for the livelihood of its workers and reviving economic activity.

How to sell liquor safely during the lockdown

At many shops Social distancing norms were forgotten as if they never existed. This is a particularly hazardous situation as COVID-19 virus spreads via close contact with infected person. So are there any safe options to deal with such rush ??

Following 3 ways are some of the measures that can been considered.

4 Repercussions of liquor consumption in a lockdown

Despite all the need for revenue, consuming liquor during lockdown is not without its setbacks.

Secondly, although state governments like Kerala have argued that withdrawal symptoms in alcoholics is leading to extreme behavior and even suicides. However, as per medical professionals, these are relatively fewer than the undue disease burden caused by alcoholics on healthcare system, especially in a time when the resources are already strained.

Thirdly, considering Indian government’s National Target of 10% reduction in alcohol use by 2025, reopening liquor shops is a loss of opportunity in that respect.

Fouthly, WHO has clearly stated in its website that access to alcohol should be restricted during the pandemic as the psychological and health risk of substance abuse are even higher in a lockdown situation.

So what should you do ?

Follow a healthy lifestyle as recommend by the World Health Organisation to boost immunity for virus resistance. Interaction of Covid-19 with non-communicable diseases like hypertension or diabetes is well documented. And alcohol further increases the risk of non-communicable diseases, causing a vicious cycle.
Read Also :-Daily Current Affairs Quiz
Nonetheless, Indian government has chosen to keep the liquor shops opened. Now the only possible choice left is to maintain a balance by allowing rationed sale to individuals to preserve public order and public health in face of a lockdown economy.

Q. So what do you think is it pragmatic to open shops for liquor sale amidst COVID-19 pandemic? let us know in the comments.

This article series is a part of ForumIAS's Qrious Project. You can find other article in the series HERE→